Some nice person referred me to this catalog page to verify the tumblers’ provenance.  I’d note the URL, but each time I type it, the image is rendered.  If interested the URL should show in the most recent comment.  Thanks again to my correspondent. 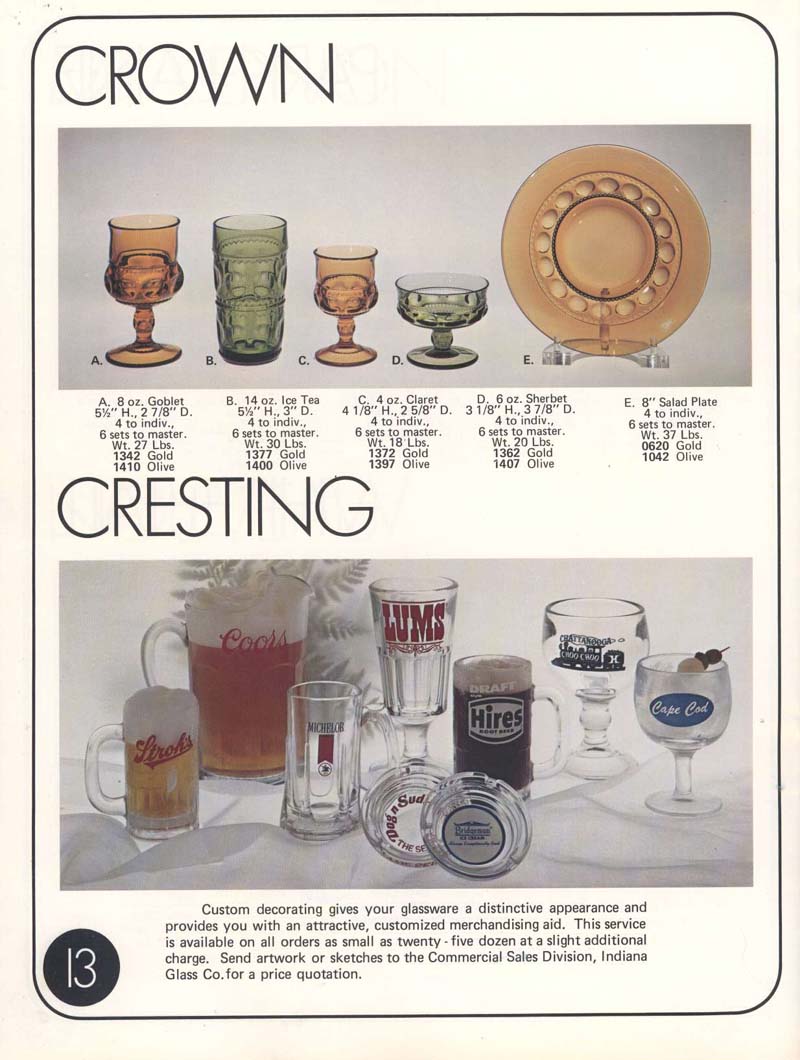 The blue compote was sold along time ago.  Still have the amber and now I have these amber tumblers to match!

Not sure if this piece is Indiana – two seam marks, elongated thumbprints.  Heavy pieces.

I think this is a pretty, pretty common piece.  I have two, this blue carnival and a gold carnival piece that I bought yesterday at Stapleton’s Auction in Newtonville, in different colours and I don’t think they are very old.

This is what I learned at Carnival Heaven:

“Indiana Pattern number 77 known by a variety of different names. King’s Crown, Crown, Thumbprint, Early American Crown and Thumbprint and when it was made in carnival glass, it was called a 5 inch Wedding Bowl. This compote was made for MANY years, in MANY colors and came in a covered and uncovered version. Please see the table below for some of the colors made.”  This page provides a number of examples in the different colours.

Vintage from Paul offers this Guide to King’s Crown:

“The pattern, produced by both Indiana Glass and Tiffin Glass was originally called Excelsior as manufactured in the late 1800’s by the Adams Glass Company.  The pattern gained popularity in the late 1800’s due to its’ clean lines and at the time deep ruby staining of the top portion of the piece.

The glass was quite heavy and thick in order to accommodate the very deep thumbprints on the lower portion of the body of the pieces, mainly creamers and open sugar bowls.

The early Indiana Glass pieces were in clear crystal as well as crystal with ruby staining.  In the mid to late 1960’s Indiana Glass was manufacturing this popular pattern in amber, olive green, smoky blue and milk glass.  The staining colors included ruby, cranberry, yellow, gold and platinum.  When Indiana Glass acquired US Glass the molds were retooled and incorporated into the vast collection of Indiana Glass.

The company continued to make this pattern well into the 1990’s in a rainbow of colored glass.  The last color being produced was an Imperial Blue color.”

I am not a big collector of European glass but these two pieces were too pretty to pass up.  Picked them up in Florida recently.

Meissen is famous for its long history of making items in porcelain.  I don’t know when they starting producing in crystal, but this manufacturing line would appear secondary to the porcelain.

These glasses are marked with the letter ‘M’ and one has a Meissen gold label on its base.

I have been advised that these are the ice teas, but they would look beautiful with any beverage.

I picked up this little dish in Florida recently.  Recognized the Baroque stem (line #2496) but didn’t know the etch.

I have read that the floral etch was called Italian Lace initially and then Gold Lace at a later date. It was produced from 1938-1942.

The rims had gilt on them, but

much on my piece has been worn away on the top edge and has loss spots on the base rim.  I bet the gold enhanced the piece.  It’s still cute!